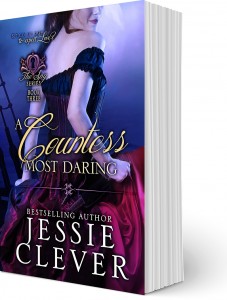 A Countess Most Daring: Book Three of the Spy Series

In Book Two of the Spy Series, For Love of the Earl, two agents for the War Office in search of Alec and Sarah’s kidnappers boarded a ship for unknown destinations.  In Book Three, we find out what happened to them.  Katharine Cavanaugh, the Countess of Stirling, has always lived according to the expectations of her heritage.  American mercenary Matthew Thatcher has spent his life running away from every expectation he has for himself.  But when their latest mission from the British War Office goes wrong, trapping them behind enemy lines, they must decide if they dare to realize the greatest expectation of all: the expectation of love.

To Be a Spy is free until the end of 2017! Grab your e-copy now of the romantic short story where Samuel first meets Penelope. Check the book page for all the links.

I’m a guest on author Gem Sivad’s blog today talking about Inevitably a Duchess.  Stop by and say hi! Click here to read my guest post.

I’m visiting the beautiful Historical Heartbeats blog today with To Be a Spy, and I’ll be giving away a free e-copy of the short story to a random commentor.  Pop on over and enter for your chance to win!

I’m visiting with two great authors today to talk about Kate and Thatcher’s story, A Countess Most Daring. Want to know what is my guilty pleasure read or why I first decided to start writing?  Find out when I talk with author Suzy Knight here. And as for my visit with Lisa Chalmers, well, let’s…