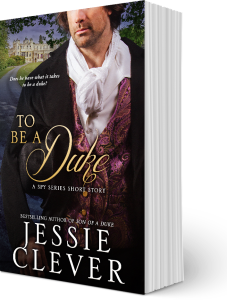 “You are not at all concerned your wife will find out?”

Alec stood in the bedchamber of one of London’s most refined and most adventurous widows and casually replaced the stopper in the decanter of brandy.  He set it carefully down on the gold-plated tray that seemed rather ostentatious even to him.  Lady Hilary Hunisett had a reputation for ostentatiousness though, and he supposed the tray was simply indicative of the rumors circulating about the ton.

“My wife?” Alec said, turning to the woman now.

Lady Hunisett’s robe was tied loosely at the waist, its soft folds of silk accentuating the exposed expanse of her bosom.  She was in rather good condition for her age and hedonistic lifestyle.  Alec would have thought the woman’s drinking, poor eating habits, and reckless living would have taken their toll.  But her skin was still firm and flawless, a porcelain white against the red silk of her night rail peeking out from under her robe.

Hilary Hunisett had been a catch during her season twenty years ago, or at least that was what Jane had told him.  Alec wouldn’t have doubted it.  It seemed the woman was still accustomed to such attention.  Attention she now demanded from Alec.

“I think you need not worry about my wife,” Alec continued when no response from the woman came.  Handing one of the brandy glasses to Lady Hunisett, he was careful to stroke her fingertips with his own.  He could see the responding thrill illuminate Lady Hunisett’s eyes, and Alec smiled, allowing heat to enter his gaze.

Lady Hunisett smiled coyly, reaching up to toy with a strand of her auburn hair, twirling it around her finger before allowing the curl to fall and trickle invitingly down her bosom.

“Why is that, my lord?” Hunisett said.

Alec turned his smile into more of a smirk.  “My wife is a simpleton, my lady,” Alec said, bending forward as if his words were a secret meant to be shared only between lovers.  “Surely you’ve heard the story of where my father found her?”

Lady Hunisett looked up at him through long eyelashes, much darker than her auburn tresses.  “The story?” she said.

Alec laughed softly, picking up his hand to run a single finger along the line of her collarbone.  She trembled under his touch, and Alec captured her gaze in his.  “She’s a nobody, I’m afraid,” Alec said.  “My father took pity on some old woman’s charity case, and I’ve been strapped with the burden my entire life.  You cannot imagine what I’ve been forced to endure with such a lowly bred wife.  Just once I would like…”

His finger had trailed dangerously close to the valley between her breasts.  He looked up at Hunisett’s face, his mouth slightly agape, his eyes speaking of untold horrors, terrible afflictions he’d been forced to suffer during his awful marriage.  Hunisett blinked, her lids closing slowly over her amber eyes, her gaze drinking him in until he felt completely absorbed.

“You poor man,” she said.  “Someone as extraordinary as you should never have had to suffer the way you have.”  She stepped closer to him, the folds of her robe rubbing against the fabric of his breeches.  “Whatever can I do to make your life just a little more comfortable?”  Here she slipped a single leg between his, her thigh rubbing against him in a most intimate manner.

Alec smiled.  “Oh, I think I can come up with a couple of ideas of how you might help.”  He paused, took a sip of his brandy.  “But first, you must tell me where you acquired this lovely brandy.”

Hunisett’s eyes flashed, and her smile grew devilish.  “I have a source,” she said.  “A wonderful source who gets me the finest French brandy.”

Alec laughed softly.  “Of course, the finest brandy would be French, but this is rather exquisitely aged brandy.  Tell me, my darling, could it have been acquired during that terrible skirmish with that Napoleon chap a few years ago?”

Hunisett tipped back her head and laughed, the sound that of bells tinkling in a soft wind.  “Oh, you are lovely, Stryden,” she said.  “Of course, my source smuggled in brandy for me during the war.  Do you think I would have gone without?”  She reached up, ran a fingernail along the line of his jaw.  “My man not only gets me fine brandy, my lord, but he’s very capable of doing…other things…when I ask.”

Alec raised a single eyebrow.  “Is that so?” he asked.

Hunisett’s smile faded into something more beguiling.  “My man brings me the finest silks, the best tea, and the loveliest spices from India without having to go through the East India Company,” Hunisett batted her eyelashes at him.  “I haven’t paid a single tax or fee on anything in years.  I’m a rather spoiled woman, I’m afraid.”

Alec smiled, reaching out to pull Hunisett closer.  The movement brought her body against the length of his, and he cradled her in his arm.  “And I know you would share your source with me, wouldn’t you, my lady?  I mean in the interest of improving my rather burdened life?”

Hunisett smiled, reaching up that single finger to once more stroke the line of his jaw.  She seemed to push herself higher against him, and her lips came closer to his.  “His name is Lord Lucian Rye,” she whispered, closing her eyes as she waited for his kiss.

It’s finally available in paperback! To Save a Viscount: Book Four of the Spy Series I know, some people do still read paperbacks, and more, some readers collect them.  So I’m happy to report you can now get your copy of To Save a Viscount in trade paperback. From the back cover… When an assassin…

I’m always surprised by the characters, scenes, and story lines that capture my readers’ attention. I just hit the halfway mark in Samuel and Penelope’s story, Once Upon a Page, the first book in the Shadowing London Series, and as is usual with most of my stories, the characters have gotten away from me. This…

Squee, peeps! Jack and Maggie recently visited the Teatime Tattler! If you’re not familiar with the Tattler, then you probably don’t know the Belles in Blue either. Pop on over for a scandalous account of Jack and Maggie’s first encounter in society. For more about To Save a Viscount, the bestselling Regency romance, visit the…