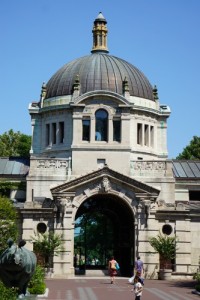 I love the Bronx Zoo because it completely and totally creeps me out.  It’s the best visual example of why I love history.  History leaves a mark.  A mark that humans often attempt to obliterate.  Sometimes we’re successful.  Sometimes we are not. At the Bronx Zoo, one can read the zoo’s history in its architecture.

The first time the hubby and I visited the Bronx Zoo, we took a bus to the Bronx, were dropped off on a random sidewalk (no clear bus stop visible), and walked under an overpass to find the entrance to the zoo.  At closing time, we walked back to the sketchy spot on the sidewalk where we’d been dropped and hoped to God that a bus came back to pick us up before we were murdered.  The bus did come back, and we made it safely back to Manhattan for a delicious Italian dinner.  Now about the zoo. 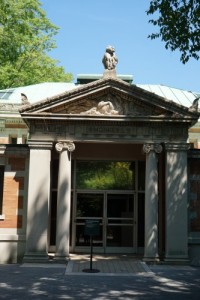 The New York Zoological Society formed in 1895 with the purpose of encouraging the study of zoology and the preservation of animals.  On November 8, 1899, the Bronx Zoo opened, then called the Bronx Zoological Park.  While I could write a whole series of blog posts on how big game hunting was seen as a natural progression of zoological studies and animal preservation (yes, it was; that’s history, folks. Let’s not try to sugar coat it by pretending it didn’t happen.), I want to focus on the Beaux-Arts architecture, prominent during this point of the Gilded Age, and evidenced in the buildings at the zoo. 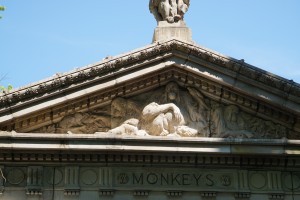 Cornices and Statuary found on the Primate Building, Bronx Zoo

Beaux-Arts architecture, to me, feels like a mash up of all the great architectural styles of history.  It’s like we got to the Gilded Age, and architects everywhere threw up their hands and said, we’ve done it all, so let’s do it all again but at the same time.  See if you can find the notable Beaux-Arts characteristics in these buildings: 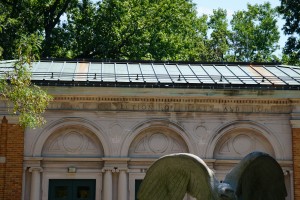 You can see from these photos that Beaux-Arts architecture was an ode to the past, demonstrating clear links to classical architecture while trying to chart a new course in design.  While these pictures may show you the architecture common in the Gilded Age, it does not pass along the feel of visiting this modern day zoo so steeped in history.  I encourage every history lover to put this destination on their bucket list.