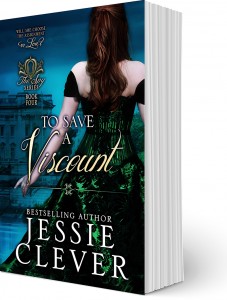 At the end of A Countess Most Daring, we learned of the death of Richard Black, the Duke of Lofton.  Or did we?

He had grown so accustomed to the sound of gunfire that he did not hear the shot that was meant to kill him.

This would have worried Richard Black, the Duke of Lofton, if he had had time to think on it. But as the situation inherently required immediate action, prolonged and abstract thinking on the subject was neither prudent nor wise. So he refrained. Instead, he wondered who it was that smashed into him at incredible speed, sending him tumbling backwards off the walk along the Thames and into the bitter, black water below.

He had been meeting his contact there along the water at an unholy hour, and darkness had lain all about him. The exchange had gone as planned, and he now held the knowledge that he knew would prove key to his current assignment with the War Office. But as the inky water of the Thames closed over his head, he wondered if he would ever get that information to the necessary people.

And then as the last of the light disappeared, he thought of Jane, his wife. His Jane. He did not think of her in specific instances or certain memories that lay in his mind. He thought of her in pieces. Her smell. Her laugh. The sound her hair made as she brushed it at night. The way she always laid her hand on top of his whenever they should find themselves sitting next to one another. Her amazing talents with chestnut roasters.

He would have laughed if such an action would not speed up the inevitable drowning that suddenly became all too real, flushing thoughts of Jane from his mind. His arms began to push against the water as his feet began to pulse, driving him toward the surface. Only he did not move. Whoever it was that had slammed into him still held him about the waist, dragging him deeper into the water. He began to struggle, the need for air and life and Jane surging through his veins in a way he had never felt before.

And then a hand brushed against his cheek, and slender fingers came to rest across his mouth. He wanted to open his eyes, but he knew it would do no good in the black water. But he let the feeling of his attacker’s hand brush against his skin, the shape of it press into his face, the narrowness of limb and the delicate arch of bone.

It was a woman who held him beneath the water.

And he stopped struggling.

Come check out my interview with author Tara Quan today.  So many great questions.  You won’t want to miss it!

In the beginning of Inevitably a Duchess, we are given the treat of seeing Jane with Nathan and Alec as young boys.  And in this scene, Jane and the boys recite a bedtime chorus: “Now then, boys, what time is it?” she asked once she was fully standing. Alec shot up off the floor, a…

Once Upon a Vow Shadowing London Book Two Visit the book page for buy links. Jane Black is plain and smart, a combination sure to kill any prospects found in a London season. Pretending her wallflower status is of no concern, Jane focuses on the quiet country life she’s planned even as she struggles with…