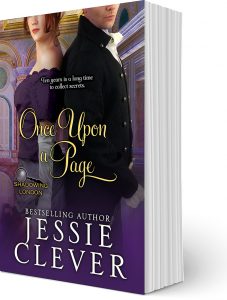 Once Upon a Page

The most dangerous thing a lady can possess is a profession.

Ten years ago, Penelope Paiget promised she’d wait for Samuel Black. But ten years ago, she was only a genteel impoverished paid companion, forced into service after her father’s death revealed his insurmountable debts. Now she’s a successful novelist, posing as secretary to the Earl of Wickshire to hide her identity.

The most dangerous thing a gentleman can possess is a past.

Ten years ago, Samuel Black chose to go his own path instead of upholding his family’s legacy as spies. But now having fought for the formation of the Metropolitan Police Force, echoes of his past and his true origins remind him just how unworthy he is to call himself detective inspector. Let alone Penelope Paiget’s husband.

But when a dead body appears in the Earl of Wickshire’s drawing room, they have no choice but to trust each other with their secrets if they are to find the killer before it’s too late.

Emily and Xavier’s story is now available! Find all the buy links on the book page and get your copy today. About the Book Lady Emily Black will do anything for redemption. Haunted by a tragic mistake in her past that endangered her family and nearly cost the life of the only man she could…

Are you ready for a new series? Allow me to introduce you to the cousins from the family hodge. When the Earl Falls in Love On Sale: October 21, 2021 As a confirmed wallflower, Lady Audrey D’Arcy dreams of the day she’ll officially be on the shelf and out from under society’s, and her mother’s,…

When She Knows is being showcased on Flash of Romance today. Stop by for an excerpt!

I’ve teamed up with over 100 amazing romance authors to give away a huge collection of novels, short stories, and more – 100% FREE! Plus, you’ll also have a chance to win a Kindle Fire or Nook Tablet! You can win my novella, Inevitably a Duchess, plus books from authors like Collette Cameron and Katherine…